An underactive thyroid can be medically managed in a number of ways including the use of synthetic drugs and natural supplements. One area often overlooked by individuals suffering with hypothyroid problems is diet. There are everyday foods that can alleviate hypothyroidism and others that exacerbate thyroid function problems. When functioning normally, the thyroid gland produces thyroxine (T4) which is then converted into triiodothyronine (T3) by an enzyme called Iodothyronine deiodinase which contains selenium. Selenium is used to process the thyroid hormones. In hypothyroidism, these vital hormonal functions are reduced, causing hormonal imbalance.

Sufferers of hypothyroidism can help alleviate some of these problems by following a carefully selected diet to compliment the prescribed drugs they are given by their health practitioner. Certain foods aid this chemical process by helping the production of thyroxine, or where there is a deficiency, increasing the level of selenium found in the thyroid hormone processing enzyme.

Moderation and balance is the key to a healthy hypothyroidism diet and it is generally recommended that you speak to your doctor or dietician prior to making changes to your intake.

Foods for an underactive thyroid:

Fish, such as tuna, sardines and trout are a good source of selenium, the nutrient which aids the processing of thyroid hormones. There are also other benefits with fish consumption such as its high level of omega-3 fatty acids which help brain function, inflammation and your immune system.

Nuts are another source of selenium but should not be eaten in large quantities as they are high in fat.

Shellfish and Molluscs such as oysters, clams, lobster, shrimp, calamari and mussels are packed with this vital nutrient.

Whole-wheat Bread is another source but lower in terms of selenium per gram when compared to the sources above. Whole-wheat bread should not be consumed in large quantities or prior to taking your thyroid drugs as it contains gluten which can affect the absorption of synthetic thyroid hormones.

Mushrooms are low in calories and some species are a great source of iron. They also contain selenium which is not only good for an underactive thyroid, but also for bladder function.

Meat such as pork, beef, lamb, chicken and turkey are another source of selenium, protein and other healthy nutrients but these should always be consumed as part of a balanced diet as some studies have linked them to heart disease and other medical issues (particularly red meat).

Sea Vegetables, including Kelp and Kombu are high in iodine. Kelp was the original source of iodine in the 1800’s and as many people with hypothyroidism have an iodine deficiency, these are great vegetable to include in your diet.

Fortified Milk not only comes with the benefits of vitamin D, but is also a source of calcium and iodine.

Potatoes are another source of iodine, particularly when eaten with the skin.

Yoghurt is a natural pro-biotic and is a great source of iodine. Yogurts can be used in cooking, with salads or just eaten on their own. 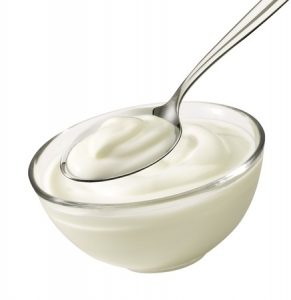 No dietary recommendation would be complete without mentioning fresh fruit and vegetables. They are typically low in calories and aid weight loss. However, cruciferous vegetables, such as broccoli, cabbage, cauliflower and turnips should be taken in moderation and cooked well for individuals that have hypothyroid problems as they can interfere with the absorption of iodine.

Food and beverages to avoid:

Soy and soy based foods contain phytoestrogen which can increase oestrogen levels in the body. Oestrogen could possibly interfere with the processing of T3 and T4 thyroid hormones according to some studies.

Cruciferous Vegetables, as mentioned above, these can interfere with the production of thyroid hormones and iodine absorption.

High fat foods such as French fries, mayonnaise and deep fried chicken can hinder the ability to produce thyroid hormones.

Coffee can block the absorption of synthetic thyroid hormone replacement drugs. It is recommended that coffee is not consumed around the time of taking your thyroid medication.

Alcohol is a toxin and therefore, it is recommended that people who suffer with an underactive thyroid that are on medication, should not consume it at all as it can create problems around synthetic hormone absorption as well as thyroid hormone production.

Can Pets Have Thyroid Issues as Well?